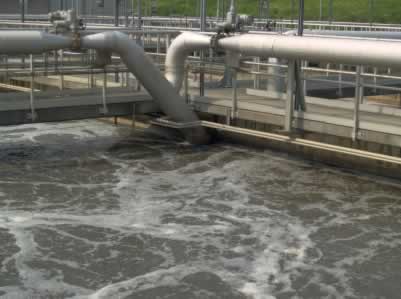 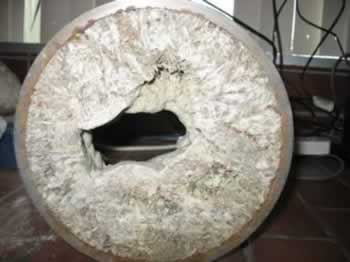 Struvite is a mineral precipitate that causes major problems in Waste Water Treatment Plants (WWTP) in the United States, as well as WWTP’s throughout the world.  Struvite initially precipitates in crystalline form.  When Struvite is left untreated, its initial brittle crystal precipitate turns to a solid scale and ultimately to a concrete-like hard rock formation.  When Struvite forms its rock formation in pipes, pumps, centrifuges, anaerobic digesters and other parts of a waste water treatment plant, it significantly slows the process plant down and in some cases forces the plant to shut down until the struvite is removed.

The three chemical components of Struvite are magnesium, ammonia, and phosphorus, also known as MAP for short.  The chemical formula for the formation of struvite is Mg2 + NH4 + PO4-3 + 6H2O -> NH4MgPO4 - 6H2O, which tells us that when magnesium, ammonia, and phosphate combine in water in a mole to mole to mole ratio of 1:1:1 (one mole magnesium combining with one mole of ammonia and one mole of phosphorus) the Struvite crystal forms.  At WWTPs the wastewater’s temperature and pH are also contributing factors to precipitating and creating Struvite. The higher the wastewater pH the more likely the mole to mole MAP balance will be affected and the formation of Struvite crystals will occur.

The majority of wastewater treatment plants in the United States use an activated sludge process to treat their wastewater.  Their primary sludge and activated waste sludges are combined and gravity thickened before they are sent to the WWTP’s anaerobic digester for processing.  From the anaerobic digester, the biosolids are then dewatered using the WWTP’s centrifuges.  Struvite is known to cause problems in the areas of anaerobic digesters and centrifuges.  Struvite formation can cause problems for the pumps pumping digested biosolids through the dewatering and Struvite scale has been known to form on WWTP centrifuges, again interfering with the dewatering process.

Struvite, NH4PO4·6H2O, will cause problems in WWTP systems handling anaerobically digested biosolids and also in the supernatant derived from biosolids dewatering.  WWTP managers have used a number of different products and techniques to remove Struvite once formed and to prevent Struvite formation.  Struvite Removal and Struvite Prevention Solutions

Struvite Remover has the ability to dissolve struvite concrete-like rock formations. It is a buffered acid, non-corrosive, non-hazardous and safe for personnel compared to other acids. Can be used in recirculations, soaks, low-pressure sprays and foaming applications. This product can also be used for prevention, typically dosed between 30-90ppm.

Struvite Dispersant, when utilized as an inhibitor, will prevent the formation of Struvite in WWTP and other operations, typically dosed between 30-90ppm and has an added polymer.